To show how to pronounce homophones we use the International Phonetic Alphabet (IPA). The IPA are the symbols you see after the words in the brackets – like this/wʌn/. These IPA symbols tell us exactly which sounds to pronounce in each word. Don’t worry if you don’t know all the IPA symbols. Here is what you need to know about the International Phonetic Alphabet (IPA).

Remember in the IPA the two dots /:/ means the vowel is long, remember that each IPA symbol represents a sound and this dash /’/ means the next syllable is stressed.

While practicing these English homophones exercises, pay attention to the word stress, rhythm and emphasis

The homophones practice below are words that are traps for ESL speakers. Many non-native English speakers don’t realise that these words are homophones.

Time for your English Homphone practice out loud to check these homophones pairs and English homophones sentences.

Remember that each homophone pair in this section has a LONG vowel sound. So make sure you pronounce a long /u:/ vowel in crews and cruise, a long /i:/ vowel in sweet, suite, genes and jeans and a long ‘or’ vowel in pause and paws.

Listen to the recording and then record your own speech to check your pronunciation of the English homophones examples – check the two homophones sounds the same.

The crews enjoyed the cruise.

Each suite has sweets.

The vet paused to check the cat’s paws.

Many ESL speakers have difficulty with the words below because they have double vowels! Make sure you make two vowel sounds -/oʊ/ in rose, rows, thrown and throne, /eɪ/ in way, weigh, whey and /aɪ/ in sight and site.

It often really helps learners to understand these are homophones. Many students say to me ‘I’ve been trying to say them differently all this time’ because they just didn’t realise they were homophones.

When you listen to the homophones sentences, remember to pay attention to the pitch of the voice, the up and down. This is the way we mark the stressed syllables in each sentence.

Find a rose in the rows.

It was thrown over the throne.

There was a strange sight on the site.

See a homophone word list below of homophones with double / diphthong vowels.

Many non-native English speakers don’t realise that these words are homophones and it really improves their pronunciation and confidence when they see that words like gorrilla – guerilla and kernal – colonel and career – Korea are prononced exactly the same way.

While some of these homophones are not words we use all the time, they are still quite common and many of my students say ‘Oh wow – all these years I have avoided using the word ‘colonel’ because I wan’t sure how to pronounce it’ and many say they didn’t understand that word when listening to others.

In these homophones, you need to pay attention to word stress and putting the emphasis on the right syllable in words.

As you hear each English homophones exercise below, listen carefully to where I place the word stress. Pay attention to the up and down – or the ‘pitch’ of my voice. Focus on word stress in your own speech as you practice and record your pronunciation.

Double check your word stress in each of the homophone examples below.

Make sure you are getting the stress on the right syllable while you complete this English homophone practice. Remember that the /ˈ/ in the IPA tells you that the word stress is on the next syllable.

Downloading the full homophone list below for English homophone practice will help you correct many words that are commonly mispronounced by ESL speakers.

In my experience, the most commonly mispronouned English homophones are ‘career’ and ‘Korea’. Many ESL speakers mispronounce the word ‘career’. They put the word stress on the first syllable.  The word stress should be on the 2nd syllable – exactly the same as in the word ‘Korea’.

Don’t confuse these with ‘courier’ – which is not a homophone. Courier is pronounced /ˈkʊ.ri.ər/.

This is the one of the most comprehensive English homphones lists available and it includes the IPA International Phonetic Alphabet for each homophone example. This homophones list includes all the homophones mentioned on this page and is split into sections for short vowels, long vowels, dipthong vowels and longer words.

This English homophones printable list is a great tool for ESL speakers.

You should remember to pay attention to vowels and word stress as you go through the list.

For homophone practice with long vowels (you’ll see /:/ in the IPA), you should check you are making a long vowel and not a short vowel.

And importantly, for the homophones practice for multi-syllable words, pay attention to making good word stress in each homophone pair.

Homophones and Your English Speaking Confidence

When people lack confidence with their spoken English it can really hold them back. It’s tiring and exhausting!

Revising areas such as how to pronounce English homophones can really help.  The English pronunciation homophones exercises on this page can help people improve their speaking confidence through improved pronunciation skills.

For many ESL students, covering homophones is an eye opener. We say something is an ‘eye-opener’ when it’s surprising. Many of them say to me ‘All these years and I’ve been trying to say those two words differently, and now I know that they are actually pronounced the same way!’

For example, many of my overseas students from non-English speaking backgrounds mispronounce words like ‘pause’ – they use the incorrect vowel sounds. It helps so much when they understand that ‘pause’ is exactly the same as ‘paws’.

It gives people confidence to know that they are pronouncing homophones correctly.

Correcting your pronunciation of homophones with this English homphones list can make your English clearer and build your speaking confidence. You can be confident that you are pronouncing these words clearly and correctly.

How to pronounce the word ‘homophone’?

The word ‘homophone’ is pronounced as /ˈhɒ.mə.foʊn/. The word stress is on the first syllable, the vowel in the 2nd syllable is the weak vowel schwa and the last vowel is the diphthong vowel /oʊ/.

Why is English pronunciation and spelling more difficult than other languages?

Spelling and pronunciation is more difficult in English than many other languages because English is not a phonetic language. This means that the way a word is spelled does not tell us exactly how to pronounce it. This makes English pronunciation a challenging area for many learners of English. The spelling and pronunciation are very variable. Words can look very different (eg suite and sweet) and be pronounced the same way! And similarly, words that look similar can be pronounced quite differently, for example, ‘cost’ and ‘post’.

Why are there so many homophones in English?

What is the difference between a homophone and a homograph?

Like many ESL speakers, you may have heard of homophones and homographs. Are you wondering what’s the difference between a homophone and a homograph? Here is a clear explanation with some examples.

A homophone is a word that has the same pronunciation as another word but is spelled differently and has a different meaning. For example ‘toe’ and ‘tow’, ‘rows’ and ‘rose’, ‘there’ and ‘their’ and they’re’.

A homograph is a word that has the same spelling as another word but has a different meaning. Homographs may be pronouced the same way or differently.

Improve your pronunciation of homographs and homophones in sentences and conversations with a full Speech Active Course.

Why is the International Phonetic Alphabet (IPA) helpful for learning homophones?

The IPA is set of symbols where each symbol represents a speech sound or tells us where the word stress is. The IPA for English has 44 symbols. The dash /ˈ/ indicates that the next syllable is stressed.

The IPA tells us the correct pronunciation of a word so it is very helpful when learning homophones. Look at homophones: crews & cruise – they look very different but if we look at the IPA – /kruːz/ – it tells us that the pronunciation is exactly the same for these homophones.

Here is another example of how the IPA looks for the words ‘moose’ and ‘mousse’. See how this homograph looks in the IPA in the dictionary below. 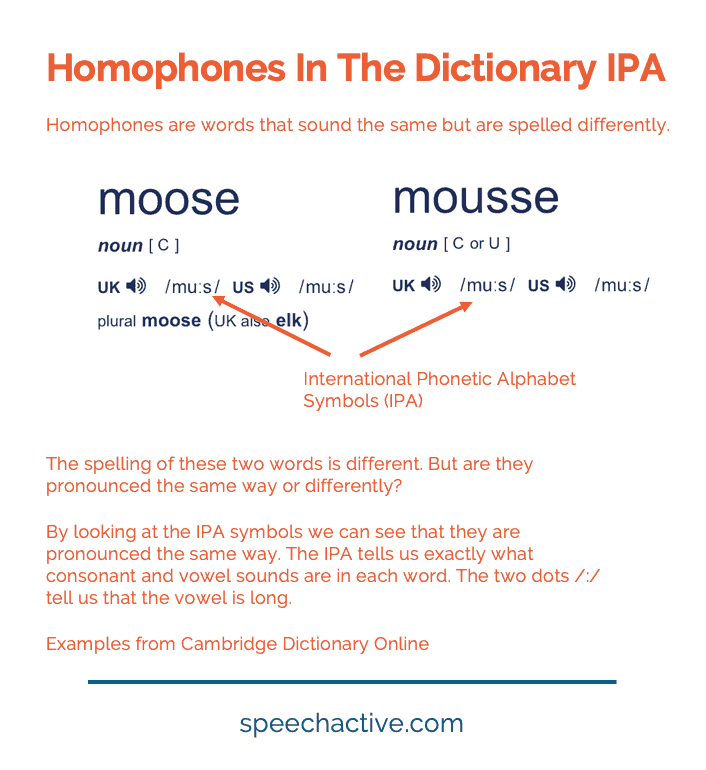 Do I need to learn all the IPA symbols?

No, I suggest you just learn the IPA symbols for the sounds that you have difficulty with. Try and identify which sounds are difficult for you and learn the IPA symbols for them. Also you remember that the two dots /:/ are a long vowel, when you see two vowel symbols it means it’s a double or diphthong, when you see this dash /’/ it means the next syllable is stressed.

If you want to revise the IPA symbols for all the sounds in English, and also revise the pronunciation of all English vowels and consonants, you can do it here:

How can I find out the IPA symbols in words?

The best way to look up the IPA for an English word is using a good online dictionary. So next time you’re looking up how to pronounce a homophone I recommend the Cambridge Online Dictionary, it’s very reliable and easy to use. The IPA (International Phonetic Alphabet) in the Cambridge online dictionary is excellent, you can see each IPA symbol and the word stress marked in. You can also click to hear the word pronounced in British and American style English.

Thank you for visiting our homophones practice page. I hope it has helped you correct the English homophones that you use regularly.

Here are some other helpful English Pronunciation resources that might help you:

See our course tour video below.

Keep up the great work on improving your spoken English.

Please contact us at Speech Active to talk more about how we can help you improve : )

Remember, a little bit here and there every day helps.