Do you get the feeling that your patients or colleagues don’t understand your English easily?

Problems with English pronunciation can negatively affect your confidence and career opportunities.

Welcome! Today, on this page you will:

Not being easily understood by others can leave you feeling tired and frustrated. It makes working in some conditions more challenging, for example, in high stress situations, noisy environments, with tired patients,  people in pain and with the elderly.

Why is pronunciation Of Medical Terminology in English Challenging? Pronounciation in English is challenging because English is not phonetic, meaning that the spelling doesn’t tell us how a word is pronounced. The medical words ‘fatigue’ & ‘phlegm’ are often mispronounced by doctors. It’s pronounced as /fəˈtiːɡ/ and /flem/ which are very different to the spelling.

These medical terms are commonly mispronounced by international medical graduates and doctor from non-English speaking background. I often hear medical professionals mispronounce these. They put the stress on the wrong syllable or use incorrect vowel sounds and this makes these words unclear to their patients and colleagues.

After watching the English pronunciation video lesson for doctors you know understand how important word stress is for pronouncing medical terms clearly in English.

You may need to watch the video twice to improve and correct your pronuciation of this medical terminology that medical professionals and doctors use often but often mispronounce: abdomen, abdominal, epilepsy, epileptic, diabetes, diabetic, obese, obesity, hygiene, fatigue, marijuana, diagnose, diagnosis, prognosis, urinary, coronary and more.

From today, start to pay more attention to your word stress and the stress and rhythm in English.

Scroll down to improve your pronunciation of medical terminology like: eczema, hygiene, fatigue & melanoma with our audio and recording tools.

Our courses give international medical graduates and doctors from non English speaking backgrounds a flexible program to use to correct their pronunciation problem areas for clear and coniudent English.

Our English Pronunciation Courses help professionals from international backgrounds speak clearer English. Doctors take our courses to be more easily understood by their colleagues and patients.

With a Speech Active English Pronunciation Course you will:

Overseas Trained Doctors love our courses because they are:

Flexible
As a doctor you need a flexible course that you can access when it suits you. You can access your Speech Active lessons anytime and dip in and out around your busy schedule. We recommend you complete 2 video lessons each week and 15 minutes practice a day with the audio files. But the course is self paced so you choose your own schedule. Phone sessions are completed at a time that suits you.

Proven & Unique
Speech Active’s award winning courses are a world leading provider of English pronunciation training. We are the chosen provider to leading many Universities, global companies and GP training organisations. Speech Active’s combination of specialised video and audio training in conjunction with 1:1 phone training is most effective.

Aside from our standard course offerings, We have a package for doctors and medical professionals for $853 and offer a 10% discount coupon, making the final cost $768.

How To Get Started

We have a 10% discount code available for doctors and medical professionals enrolling in our courses. Email us at [email protected] to obtain the discount code and start your course.

Why is English Pronunciation difficult? There are a number of reasons and I’ll explain some of them now.

1] English Is Not a Phonetic Language.

English is not a phonetic language which means we don’t always pronounce words as they look. The problem is that the letters in English words (the way they are spelled) don’t tell us exactly how to pronounce that word. English has silent letters and the same letter can make a few different sounds.

For doctors, GPs and specialists from non-English speaking backgrounds this can cause problems. There is a lot of medical terminology that doctors use everyday that have unusual spelling patterns and look different to how they are pronounced. These are like traps for non-native speakers : )

Take this medical terminology for example:

phlegm: The letters ‘ph’ make the sound /f/ and the letter ‘g’ is silent. So it’s pronounced as: ‘flem’ or in the International Phonetic Alphabet IPA it’s /flem/

sutures:  The ‘t’ is pronounced as ‘ch’ and the 2nd syllable has the weak vowel schwa. So it’s pronounced as: ‘SU.chuhz’ or in the International Phonetic Alphabet IPA it’s /ˈsuː.tʃəz/

eczema: The ‘cz’ is pronounced as /ks/ and the word is usually pronounced with only 2 syllables. So it’s pronounced as: ‘EKS.ma’ or in the International Phonetic Alphabet IPA it’s /ˈeks.mə/

asthma: The good news is that the letters ‘th’ are not pronounced.  In British and Australian English it’s pronounced as ‘AS.ma’ which is /ˈæs.mə/ in the IPA. In the US it’s with a /z/ instead of /s/ so it’s /ˈæz.mə/. This is a small difference. Either way will be easily understood by listeners.

Listen to the audio of the native speaker and practice medical terminology with the recording tool below. 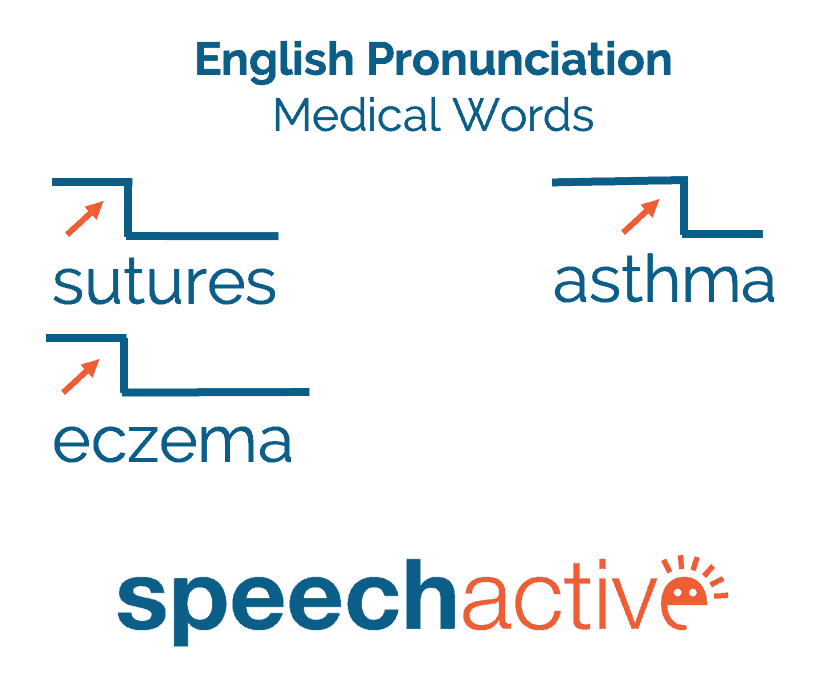 Another reason why English pronunciation of medical terminology is difficult for non-native speakers is that it has different stress and rhythm patterns to many other languages.

This can mean that many non-native English speakers find making the stress and rhythms of English challenging. They might make flat stress or put the stress on the wrong syllable in words.

This makes some words unclear. Overseas trained Doctors use many long words in their day to day communication. If you are not confident with how to use stress correctly in medical terminology and all multi-syllable English words, it means they can be unclear to listeners.

You cannot tell by looking at an English word, where the word stress is. You need to start to listen and pay attention to it!

Let me show you an example of when using flat or incorrect stress can be very confusing. An important distinction for doctors and GPs to make is the words stress in ‘important’ and ‘impotent’.

In ‘important’ all the stress and emphasis is on the middle syllable – ‘imPORtant’.

In the word ‘impotent’, all the stress and emphasis is on the first syllable –  ‘IMpotent’.

The words look similar but have very different meanings.

Let’s look at some more words that overseas trained doctors use regularly.

Remember that every word that has 2 or more syllables has one stressed syllable.

Think about how you pronounce these words? Where do you put the stress in each word?

Pronouncing these words clearly is important for doctors. Practise improving your word stress in some medical terminology like these below. 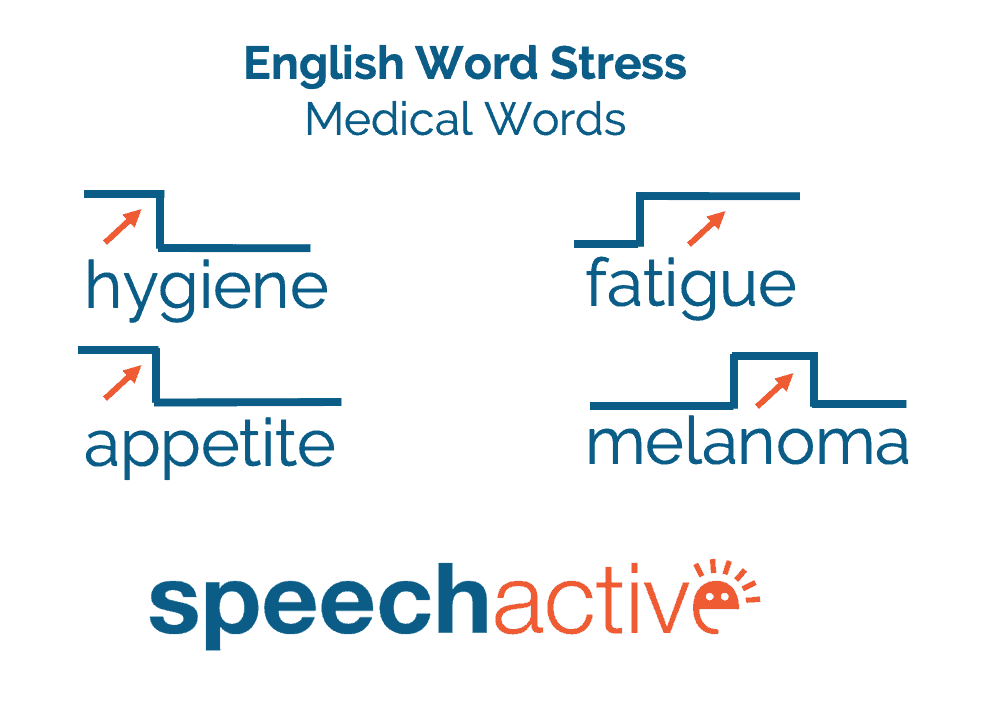 Another reason why English can be very challenging for doctors and other medical professionals from non-English speaking backgrounds is because there are a lot of sounds in English.

We have 24 different consonant sounds. For many non-native English speakers some of these will be sounds that don’t exist in their first language.

English has a lot of consonants sounds at the ends of words and also words where there are more than 1 consonant sounds in a row.

Pronouncing consonants at the ends of words and clusters of consonants can be challenging for speakers of many south east Asian languages such as Thai, Burmese, Vietnamese and also Cantonese and some Mandarin speakers.

Here are a few instances of common problems that overseas trained doctors and other non-native speaking professionals might have with pronouncing English sounds – consonants and vowels.

Clear word endings are very important in English because they distinguish one word from another. Have a look at the examples below. If the consonants at the ends of these words are not pronounced, the word takes on a completely different meaning.

More Than 1 Consonant In a Row:

Pronouncing multiple consonants clearly in a row is also really important for clear English. Look at these words. If the consonants aren’t pronounced clearly, they mean something completely different.

sick vs six
pass vs past
fine vs find

Many international medical graduates and doctors who are speakers of Thai, Burmese, Vietnamese and Cantonese (and some Mandarin speakers), pronouncing word endings and consonant clusters is often something they need to improve for clearer English.

Find out more about clusters and click here to practice consonant clusters.

The sound /v/ is challenging for speakers of many languages, for example speakers of Japanese, Mandarin, Spanish, Farsi and others. So medical words such as ‘valve’ and ‘overview’ are often mispronounced.

Did you know that English has 20 different vowel sounds? For many people, this is more vowel sounds than their first language.

This means that some overseas trained doctors and medical professionals from non-English speaking backgrounds do not clearly distinguish between the vowels in words like: cot, coat and caught, not, note and nought.

See a video on pronouncing ‘won’t’ and ‘want’ below with the correct vowel sound.

Record Your Pronunciation of ‘won’t’
(it shouldn’t sound like ‘want’).

As a medical graduate, doctor, GP, registrar or specialist, clarity of speech is very important. Conveying information clearly to colleagues and patients and their family members is a crucial part of your role.

Some international medical graduates and non-native English speaking doctors find that problems with pronouncing the sounds and stress patterns in English. This negatively affects their clarity and English speaking confidence.

Difficulties with English word stress and pronunciation makes some words unclear. This gets in the way of easy communication and negatively impacts on how effectively they communicate with other members of their medical team, colleagues and patients.

If your pronunciation is sometimes unclear you may have had patients and their family members or colleagues ask you to repeat what you’ve said but sometimes you might just get the feeling that they’ve missed a word here and there or tell by the expression on their face that they haven’t found things clear.

Patients expect to be able to understand their doctor. Factors such as age, pain levels and emotional state can affect a patient’s ability to understand other people. Unclear English can further compound their level of stress, discomfort and frustration.

> Correct use of stress and rhythm
> Improved listening skills, conversation skills and self awareness
> Good rate & volume of speaking

A Speech Active English Pronunciation Course will help you improve all areas of your English pronunciation skills.

Because your course is tailored for speakers of your first language, you won’t waste time working on areas that you don’t need to improve.

This is not a 1-size-fits-all course. Our courses help  learn in the most effective way because you’ll focus on the areas that you really need to work on for clearer English.

Many overseas trained doctors, GPs, Medical Specialists from non-English speaking backgrounds and international medical graduates haven’t spent much time in the past, working on improving their English pronunciation skills. Many people aren’t quite sure where to get help in this area.

Contact us today to discuss your English speaking goals.

We look forward to speaking with you.