What is the best English Pronunciation Poem? I have 2 favourites and as an English language learner they can be a great tool to correct tricky English words.

This article includes a fantastic free audio lesson using my favourite English Pronunciation poem. This will help you correct lots of commonly mispronounced words in English and have some fun while you’re doing it.

Use the free audio lesson above on the English Pronunciation Poem written below to correct all the tricky words in it.

I take it you already know

of tough and bough and cough and dough.

Others may stumble, but not you,

On hiccough, thorough, lough and through.

To learn of less familiar traps.

Beware of heard, a dreadful word

Watch out for meat and great and threat.

They rhyme with suite and straight and debt.

A moth is not a moth in mother,

Nor both in bother, broth in brother,

And here is not a match for there,

Nor dear and fear for pear and bear.

And then there’s dose and rose and lose

Just look them up — and goose and choose.

And cork and work and card and ward.

And font and front and word and sword.

And do and go, then thwart and cart.

I’d mastered it when I was five!

These fun English Pronunciation poems highlight just how CRAZY and unpredictable spelling and pronunciation is in English.

There are 44 phonemes or sounds in English (listen & record all the sounds in English). There are only 26 letters in the English language. So each letter can make a number of different sounds or can be silent. This is the main reason that English pronunciation is so challenging!

Why is English like this? Basically it’s because over many, many years English has borrowed words from many different languages. As a result, we have ended up with lots of different and variable spelling patterns.

Below are two of the best English Pronunciation poems on English spelling and pronunciation. They cover many words that are commonly mispronounced by non-native speakers because of the unusual spelling patterns.

The English Pronunciation Poem above is probably my favourite. It points out the variability of English spelling and pronunciation so well.

It covers the common words that are so often traps for non-native speakers. Make sure you correct all of them, the only words we don’t use very often are ‘lough’, ‘broth’ and ‘thwart’  – but all the others are common words that you need to be pronouncing well.

The words covered in this English Pronunciation Poem that non-native speakers mispronounce the most often are:

Remember to take the free audio lesson above. Listen to it a few times and then try the poem by yourself.

If there are some words that are particularly difficult for you, it can help to write the word down and write down 2 other words that rhyme with it.

For example, if you know you tend to pronounce ‘front’ with a rounded vowel more like /o/ in ‘hot’, then you would write:

This will help you remember the correct vowel sounds and also give you practise. You should then make up some sentences.

Eg I’m at the front of the line.
The meeting is at suite number 3.

Keep up the great work! Check out our other blogs posts for more helpful article for improving your English Pronunciation and correcting commonly mispronounced words in English. 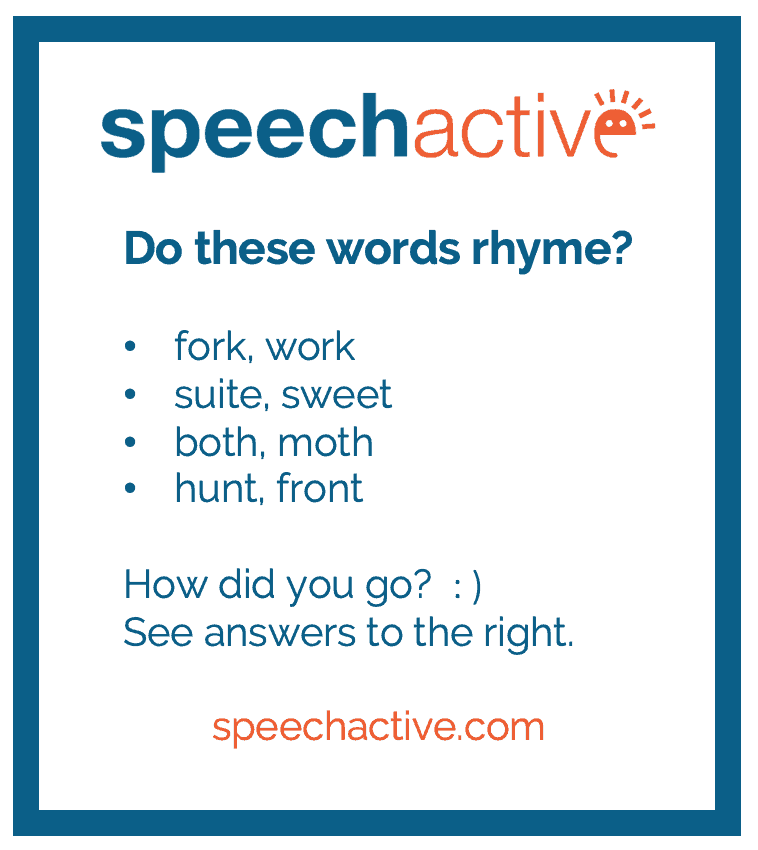 Ok, so here are the answers:

First line: No. ‘fork’ rhymes with ‘cork’ and ‘dork’. But ‘work’ rhymes with ‘perk’ and ‘lurk’. It has the same vowel as ‘were’. SOOOO many non-native speakers mispronounce this – I often hear them pronounce ‘work’ more like ‘walk’. So you should check it.

Second line: Yes. ‘suite’ and ‘sweet’ are pronounced exactly the same way. Make sure you get a good long /i:/ vowel.

Fourth line: Yes. ‘hunt’ has the vowel /ʌ/and guess what? So does ‘front’. It’s pronounced /frʌnt/. There are quite a few words in English where the letter ‘o’ makes the vowel /ʌ/. Hundreds of commonly mispronounced words like this are covered in a Speech Active English Pronunciation Course.

And, here’s another goodie : )

When the English tongue we speak.

Why is break not rhymed with freak?

Will you tell me why it’s true

We say sew but likewise few?

And the maker of the verse,

Cannot rhyme his horse with worse?

Beard is not the same as heard

Cord is different from word

Cow is cow but low is low

Shoe is never rhymed with foe.

Think of hose, dose, and lose

And think of goose and yet with choose

Think of comb, tomb and bomb,

Doll and roll or home and some.

Since pay is rhymed with say

Why not paid with said I pray?

Think of blood, food and good.

Wherefore done, but gone and lone –

Is there any reason known?

To sum up all, it seems to me

Phew! How did you go?

That one is a long one! It’s great because it covers LOADS of everyday words.

Do you have a good idea of which ones you might be mispronouncing in your everyday speaking? Remember to write a list of the ones your think you are mispronouncing and practise them.

I hope you enjoyed these poems that highlight the unpredictability of English spelling and pronunciation.

Check out our other English Pronunciation Blog Posts that explore the crazy spelling and pronunciation of English:

Thanks for doing our free lesson on this English Pronunciation poem. Keep up the great work on your spoken English.