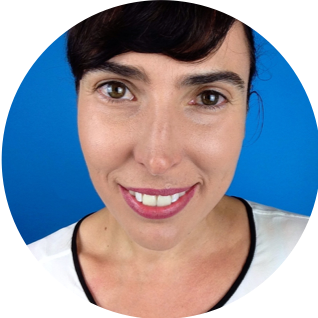 Our English accent courses help people from non-English speaking backgrounds, who are living in Australia to speak English more like a local.

Or do you want to improve your Australian accent so you sound more like a local?

Either way, Speech Active’s Australian accent training courses will help you be easily understood by listeners and sound more Australian. We hear time and time again from our students that the most beneficial thing they gained from the course was increased speaking confidence. That makes us very happy.

How will you speak better, clearer Australian English with our courses?

Our courses are a unique combination of online video, audio and phone training. Each course is fully tailored specifically for speakers of your first language.

Our courses were created by a team of Speech Pathologists, ESL tutors and e-learning specialists.

Each Speech Active course includes a 30 minute phone training session with Georgie, along with the comprehensive video course. Every course includes:

Find out more about our course for speakers of your first language: Speech Active Course List

Would You Like Us To Call You? Please fill in your details and we'll call you to discuss your English speaking goals.

See the comment below from one of our students who was looking to learn Australian English in Melbourne. See what more overseas professionals say about Speech Active Australian Accent Training: English Pronunciation Course reviews.

Watch our training tour video to find out more about how people improve and learn Australian accent and spoken English with our award winning training. You might be wondering what the best online pronunciation course available in Australia is. We are confident that our courses offer students the best combination of tailored training available right now.

Speech Active’s Pronunciation and Fluency Training Courses are the chosen provider by many of Australia’s leading Universities. They purchase our services and online programs for their international students to help them perform their best in job interviews and so they are effective communicators in the Australian workplace.

Many Australian and Global companies based in Australia choose Speech Active for their employees. We work with GPs, Engineers, IT professionals, nurses and more to help them develop clear English so they can be easily understood by their colleagues, managers, patients, clients and friends. 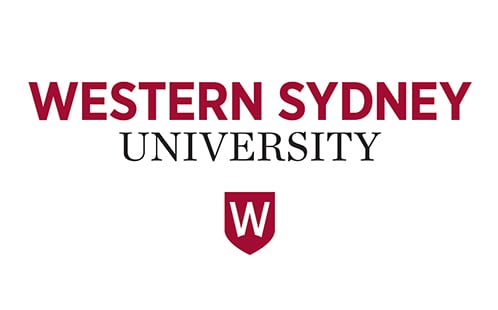 With our training, you’ll develop clear, Australian English. With our self-paced, step by step training you’ll systematically correct the areas of pronunciation for clear English.

Tailored – you’ll correct the areas that speakers of your first language need to improve for clear English. Every Speech Active course is fully tailored for speakers of different languages.

Ready when you are – access your video training online anytime, anywhere. Improve when you’re on the move with MP3 audio. Phone training can be completed at a time that suits you.

Flexible – follow the recommended lesson schedule or make up your own. Repeat lessons as you wish during your course.

For professionals – this course is for people who use English an advanced level. You’ll develop skills relevant to professional Australian workplaces and Australian social / casual situations. 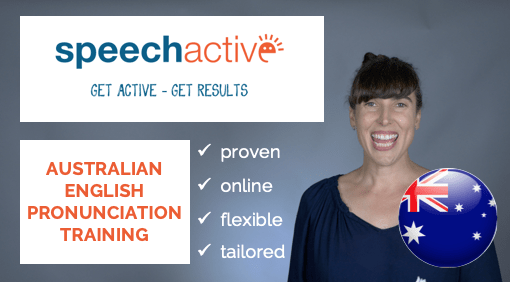 You’ll cover areas such as word stress, weak vowels, diphthong vowels and more. This is a great introduction to sounding more local and learning Aussie English.

It’s a good idea to revise all of the Australian vowel sounds – English has a number of vowels that often don’t exist in people’s first languages, such as long vowels and double  / diphthong vowels. You’ll need to work on some key vowels to make sure you’re pronuncation is clear and to sound more local.

How Important Is It For Me To Sound Australian?

Many people wonder what accent should they be aiming for. For professional life in Australia we recommend you aim for an accent that will be clear to listeners.

In our opinion, it’s not important at all that you should sound Australian. Most of our clients have the goal of being clear to all listeners.

Some of our students have learnt American or British style English in their home countries. If you have a non-English speaking accent that has an American style or British style – that really doesn’t matter – as long as your English is clear to the people around you. Speaking clearly will enable you to speak with confidence and work effectively with people. See more on this here.

To summarise, just because you live in Australia, you shouldn’t feel pressure to sound more Australian. However, if your English pronunciation is sometimes unclear to listeners this is likely to hold you back. Most employers want staff who are easily understood by colleagues and clients so they can work effeiciently.

So, the top priority should be clarity. You can still have a wonderful Spanish, Mandarin or Russian accent – but it should be clear and easily understood by listeners so it doesn’t hold you back in job interviews and in the English speaking workplace.

Are There Different Types Of Australian Accent?

The Australian accent doesn’t vary as much from location to location like in other countries such as Britain or America. In these countries, the accent used can be very, very different when you travel only short distances, like 100Km or so. Local people can guess where you are from, by the accent you use.

In Speech Active’s Australian Accent Course your teacher, Georgie (that’s me) has a mild Australian accent. I grew up in Melbourne Australia and spent many years living in the UK.  My Australian accent may be less obvious than your typical Australian.

In your Speech Active Course you will hear many different accents: Australian accents and accents from the UK and US. It’s important that you become an expert at easily understanding all types of accents.

I Want To Sound More Australian. Which Aussie Accent Should I Aim For?

Why? Because this accent is clear, professional sounding and will be well received by all around Australia and the world.

I don’t recommend you aim to adopt a broad or strong Australian accent. This can seem unprofessional in some situations and can also be challenging for people to understand.

First of all, it’s important to distinguish between Australian and English Idioms and experssions and ‘Australian Slang’.

Australian and English Idioms and expressions are things like ‘it’s got legs’ (this means ‘it’s a good idea’) and to ‘pull the pin’ (means to cancel or pull out of something). These are very important for you to learn.

Expressions like these are used all the time, in both the professional environment and casual situations also. We have some that you would hear only in Australia but most of the expressions you will hear day to day at the office will be expressions that are used in the UK and US as well.

So remember, you need to understand Australian expressions and idioms but you DO NOT need to USE them. It’s difficult to get a feel for when using expressions like these is appropriate. So, we recommend you focus on understanding them, but not neccessarily using them.

You will learn all of the important expressions and Australian idioms that you need to know for working in Australia in your Speech Active course.

Australian slang is quite different. Actually you don’t hear it used very much these days. Australian slang is things like ‘you flaming galah’ – this means ‘your silly’ and a ‘dunny’ is a toilet. If it’s ‘fair dinkum’ it’s true or real.  If you are living and working in rural Australia then you probably should become familiar with what these terms mean but I would avoid using them.

The way we use the pitch of the voice to stress certain syllables in English is very important for speaking clearly and being easily understood by listeners. This is what makes the ‘music’ or rhythm of English.

Many people don’t know that one syllable in every multi-syllable English word is stressed and making good word stress and using weak vowels are particularly difficult areas for non-native English speakers. Unfortunately you can’t tell which syllable should be stressed in English words just by looking at the spelling!

Many non-native English speakers make the stress in words too even or flat, or they might put the stress on the incorrect syllable. An Australian Accent Training Course with Speech Active will help you master word stress, sentence stress and weak vowels. You’ll become an expert at hearing and making the correct rhythm and stress in English words and sentences.

Words like ‘politics’, ‘political’ and ‘politicians’ can be confusing to learners. These words look very similar but the stress is not on the same syllable.

Listen to the audio file below and pay attention to the way that my pitch is slightly higher for stressed syllable in each word.

Improve Your Use Of The Schwa Vowel To Sound More Australian

Schwa is a very important vowel in English – in the Australian accent even more so than other types of English.

If you aren’t sure what schwa is or how to make it, see this video on How To Make Schwa.

In British English, speakers often pronounce the letter ‘i’ in weak syllables as a weak ‘i’ vowel, rather than schwa. In Australian English the ‘i’ vowel in unstressed syllables often (but not always) becomes schwa.

Here are some examples:

Should most non-native speakers worry about these differences as non-native English speaker? No way! The difference is so small and not using schwa won’t make your English unclear.

However, if you are undertaking Australian Accent Training to sound more Australian, mastering schwa is something you will need to do.

Australian English has more weak vowels than other types of English such as American or British English.

Practice sounding more Australian in these words by using schwa in the unstressed syllable.

In Australian English the letter ‘i’ in these words is pronounced like a weak ‘uh’.

We look forward to working with you.